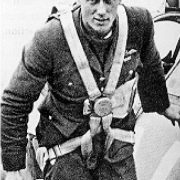 Albert Gerald Lewis was born in Kimberly in 1918 where he attended the local high school. He joined the RAF on a short service commission in August 1938. Lewis was posted to Lee-on-Solent. He was promoted to Acting Pilot Officer on 19 October 1938.

On 29 November 1938 Lewis was promoted to Pilot Officer.

Lewis was posted to 504 Squadron in March 1940 and went to France with the Squadron on May 10, 1940. Lewis was imbued with the characteristics of his native country and its education. Lewis shot down nine planes in the Battle of Britain to win a DFC and Bar.

On 19 May 1940 flying Hurricane AK-A (still in No. 203 Squadron’s markings) he got five confirmed in one day, 2 Me109s on the first patrol in the morning and a further 3 Me109s in the evening patrol. Lewis, in a letter to Tidy, describes the second patrol: “I was jumped by patrol of three Me109s as I was about to turn for base, troubled by a loose gun panel; became aware of attack as tracer streamed by. Turned in to attack and found the leader coming straight at me. Somehow his cannon shots missed, and he rolled into a steep turn almost on his back and pulled away. Suddenly there was his belly at point blank range. I rammed the nose of the Hurricane down, my head hitting the top of the cockpit glasshouse, and pressed the gun button; fuel spewed out of the L-shaped tank which the pilot sat on, and with fuel streaming behind him, the pilot flew straight down into the deck and exploded. By the way he handled his plane, I imagined the pilot to be experienced, possibly an instructor with two greenies or fledglings as the other two made half-hearted attacks, formed up together and headed home towards Brussels.

“The fight had occurred in the Rubaix area on the Franco-Belgian border. My first inclination was to leave well alone, but realising we had extra boost in the Hurricane if we needed it for short duration, I pulled out the boost control, and followed the two. I don’t think they were aware of me following them, as I was able to position myself slightly behind and below them. They were sitting ducks; short bursts into each and they plummeted straight down into the deck at a steep angle. I was able to pinpoint the wreckage and submitted my report. The ack-ack guns and ‘Bob’ Martin, MC, our Intelligence Officer, had a look at the wreckages. They were fairly close together, in wooded country. The events happened in less time than it takes to tell it.

“On landing at Seclin my ground crew met me with grins and thumbs up signs. Dougie Oliver came over to me and said, ‘We have just witnessed a wonderful scrap between one of our lads and three Messerschmitts.’ I told him that I had just had three Me’s jumped me and had managed to bag all three. He was delighted as he realised, he had witnessed with the ground crews the action I had been involved in. ‘I am recommending you for the DFC,’ he said with a grin.”  This was duly awarded to Lewis on 25 June 1940.

It appears that Lewis might have shot down Oblt Lothar Krutein of 4/JG2, who was wounded and baled out near Tournai, where he was captured by British troops. Another of Lewis’ victims may have been Uffz Jhans-Joachim Hartwig of 5 Staffel, who crashed landed near Courtrai and was taken prisoner.

Lewis describes one of the days combats as follows: “Sighted circle of Me110s over an area near Redhill. Attacked out of the sun and fired two short bursts into e/a following Hurricane down. He billowed smoke and went down steeply. Again, he attacked circle and put a burst into another Me110 – starboard engine out of action and on fire. Climbed into the sun again and again delivered attack on the remains of circle. Hit one who dropped out of fight, heading towards the coast and, with starboard engine out of action, tried to get home. Forced him down in vicinity of some hills near Crowhurst. He burst into flames on landing in a farmyard.” Once rearmed and refuelled, seven hurricanes led by Plt Off Lewis were ordered to patrol Maidstone before carrying out a sweep of Hawkringe to Canterbury inn the company of 46 Squadron. Two formations of Bf107Es were sighted and engaged. Lewis was credited with a third Bf 109 shot down for the day. Lewis reported: “As 249 leader, sighted formation of Me109s to north-east of Estuary. Climbed up from 15,000 feet to 20,000 feet but were attacked by second 109 formation from above. In ensuing dogfight was attacked by two 109s, one of which I hit in the belly as he passed overhead. He crashed into wood near Canterbury. Put burst into second 109, which attacked soon after the one I shot down, also in the belly. I did not observe this one hit the ground, but he went down smoking, where after smoking fires near the wood in the vicinity of Canterbury could have been other aircraft destroyed, as there were no bombers.” His first victim was possibly an aircraft of 8/JG54 flown by Oblt Anton Schön which was severely damaged in combat – the pilot attempted to force land the Messerschmitt but it hit a fence, somersaulted over the main road and burst into flames at Benley House, Boughton near Canterbury: Schön was killed.

Lewis also shot down a Ju88, of KG77 on this eventful day. Due to the nature of the dogfight it is not possible to assign the precise Ju88 that he shot down. Just on 1530 between 12 and 15 Ju88s accompanied by the usual large formation of Bf109Es and Bf110s were sighted over South London. The Hurricanes of 249 and 46 Squadrons quickly manoeuvred to a favourable position and led by 249 Squadron, launched an attack. The bombers were flat out which made initial contact difficult. Lewis reported: “As green leader, attacked formation of Ju88s with Blue Section, and one just dropped out with starboard engine damaged. Closed in and carried out two beam attacks from slightly above and put other engine on fire. Kept after it as it went down steeply towards coast near Selsy Bill. Crashed into sea just near coast. Shot down one Me109 which crossed my sights after engagement with Ju88. Went down in flames, then followed a second Me109 down which I attacked from above and it crashed din a wood near Petworth. This is confirmed by Sgt Hampshire of Green Section. Fired short burst of approx. two to three seconds at Me109s and a fairly long burst at a Ju88.”

Barclay recorded Lewis’ victories in his diary as follows: “Pilot Officer Lewis, DFC, shot down six Huns today! Some Shooting. He’s certain to get at least a Bar to his DFC.”

Whilst flying Hurricane V6617 ‘GN-R’ on patrol at 14.00 hrs on 28-9-1940 he was shot down by Bf109s over Faversham. Lewis had to bale out. The aircraft crashed at Tonge Corner near Sittingbourne. He suffered severe burns and was not fit to return to flying until May 1941. Tidy describes the shooting down as follow: “No 249 Squadron had been in a gentle dive, with Zulu weaving over them, when he was hit by cannon shells and set on fire. He eventually cleared the burning wreck and Jimmy Crossley followed him down, circling the parachute to prevent any danger of him being shot at…. Zulu landed safely but was severely burned and was taken to Faversham Cottage hospital, blind for two weeks, and with shrapnel in his legs. He received his little golden caterpillar with his name engraved on the back while he was in hospital, which confirmed his membership of the select band who have saved their lives by parachute.”

Some of Lewis’s planes

Alhough he flew V6617 ‘GN-R’ on 27 September 1940 it would have been painted like the aircraft depicted below with the “C” replace with a “R” and the serial replaced with V6617.