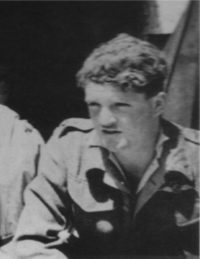 During the North African Campaign, the South African Air Force provided a significant proportion of the Allied fighter strength. 2 SAAF, 4 SAAF, and 5 SAAF formed 7 SAAF Fighter Wing of the Desert Air Force, whilst 1 SAAF was part of RAF 244 Wing and 40 SAAF performed the tactical reconnaissance role under Head Quarters control.

One of the more famous squadrons in 7 SAAF wing was 2 Squadron, who would later be known as ‘The Flying Cheetahs’.

Although 2 SAAF had numerous famous characters, I have chosen to concentrate on a pilot who spent 10 months with them, became an ace, in fact Saville ranks joint 4th with Major Douglas Golding on the SAAF list of Aces and also shares 8 confirmed destroyed with these famous South African Aces who served in the RAF: W/Cdr Lardner-Burke, F/Lt Brian van Mentz and S/Ldr Basil ‘Stapme’ Stapleton. Saville then moved on to the RAF and ended as a Squadron leader.

He joined the South African Permanent Force, being commissioned in the SAAF. His first posting was to 2 SAAF Squadron in the Western Desert on 15 October 1941.  Saville was four months short of his 20th birthday. He picked up the nick name ‘Danny’.

On the afternoon of 21 November 1941, ten Curtiss Tomahawks of 4 SAAF Squadron, with a dozen more from 2 Squadron as top-cover, mounted a ground strafe on enemy armour retreating west of Tobruk. Shortly after the formation crossed the lines, three Italian Macchi MC.200 Saettas intervened. Lt. ‘Klippie’ Stone quickly broke up the enemy formation with one of the enemy Macchis falling to his guns. Another Macchi probable hit Lt Hindes’ Tomahawk; he crash-landed his blazing aircraft and was safely picked up by British armoured cars.

Lt Saville, flying Tomahawk AN311 TA-C, pursued the other and was soon involved in a tight turning fight. He manoeuvred so closely to the nimble Italian fighter that his Tomahawk’s starboard wing struck the Macchi violently, very close to the cockpit. The Italian fell away, crashing while the impact spun Saville’s Tomahawk through 90°.

With several feet of his starboard wingtip bent at right angles, he managed to land at El Adem only due to skilful flying. The Macchi fate was unconfirmed but some thought they saw it crash and it was credited to him as a ‘probable’. This was the first of Saville’s air combat claims of the North African Skies, albeit by somewhat unconventional means! Brown and Orpen confirms the incident with the following description: ‘Saville pursued (the MC200) so closely that in breaking off his attack his starboard wing caught the Italian close to the cockpit, spinning the Tomahawk round in a 90° turn and sending the Italian crashing. Saville got back with several feet of his wingtip bent at right angles.’ Its fate was not seen but some sources credit this aircraft as destroyed; it may be the apparent ‘missing’ probable victory indicated in his DFC citation

The following day, the youthful Saville was interviewed by prominent US journalist Quentin Reynolds, standing in front of his battered aircraft. Saville commented to Reynplds that “he had had a bit of a ‘slugging match’ with the Italian!”

On 4 December 1941 Saville had 1 Ju87 confirmed and 1 probably shot down flying a Tomahawk IIb in the El Adem-Tobruk area. Orpen and Shores and Williams also include a Ju87 damaged in his score for the day.  Thomas in his article provided more information about Saville’s action on this day.  ‘Danny’ Saville had some more excitement whilst over El Gubbi. He recalled: “I saw a Junkers Ju87 which had been hit and gave it a burst on its way down. Then I did a quarter astern on a Ju87 going west. It turned right and dived and I saw smoke coming from it.”

“I then saw another Ju87 heading west and attacked from stern, seeing white smoke puffs from all over it. As it dived away I got dead astern above and gave it a burst. It started smoking, the nose yawed up and he turned over on his back and went straight down. If he thought his adventures were over, he was mistaken, as he was then attacked by a Tomahawk, which he managed to evade before finally heading home!

It is interesting to note that although the Commonwealth pilots claimed to have shot down 6 Ju 87s, probably shot down 2 more, and damage a further one, the Luftwaffe reported the loss of only a single Ju 87, from Stab II,/StG 2, in combat on 4 December 1941.

On 8 December Saville was again in action over Fort Maddalena flying a Tomahawk IIb. He damaged a MC202 and a shot down a Bf110 of III/ZG26, probably that of Leutenant Hermann Weber of 9 Staffel, which crashed whilst landing at Derna due to combat damage.

While escorting Blenheims on 13 December 1941, ten Tomahawks of 4 Squadron were attacked over Gazala by four BF109Fs.2nd Lt F C Lorentz had to bale out, but Maj.  A. X. Kriel shot one enemy fighter to pieces and Lt D W Golding sent a Messerschmitt into the sea. Top cover was provided by 2 Squadron, in which Saville lost for­mation and made for home, shooting down a Ju88 on the way. Saville damaged another Ju88 on this day.

On 22 December 1941 Saville flying a Tomahawk IIb caught a Ju88 and shot it down. He also damaged a Ju88 on the ground at Magrun Airfield. Shores, Massimello and Guest differ with the above in that they only credit Saville with damaging the Ju 88, whilst agreeing that he damaged one on the ground.

‘Danny’ Saville damaged a Junkers Ju88 whilst flying his Tomahawk IIb on 24 January 1942.

On 4 April 1942 Saville scored his last victories whilst serving in the SAAF. He shot down 2 MC202s and damaged a third over the Tobruk-Gazala area flying a Tomahawk IIb. Orpen gives the date of this incident as 14 April 1942. Too make matters more interesting Shores, Massimello, Guest, Olynyk and Bock record the incident as having taken place on 2 April 1941.

On 28 August 1942 Saville got his first success in a Kittyhawk as well as at 112 Squadron when he had a probable victory over a Bf109 in the Deir el Abyad area. Shores, Massimello, Guest, Olynyk and Bock do not record this claim.

On 1 September 1942 flying a Kittyhawk in the Alamein area Saville shot down a Ju87 Stuka.

Flying Kittyhawk Ia EV136 he had another success filled day in the Alamein area. He accounted for a Ju87 and Bf109 probable and damaged a Ju87.

On 18 September 1942 Saville received a DFC for five confirmed, two probables and three damaged whilst with his first unit.

On 2 October 1942 flying Kittyhawk Ia EV339 Saville accounted for 2 Bf109fs shot down over the El Maghara area. One of the aircraft was an aircraft of III/ZG1 with the pilot Lieutenant Walter Burger being killed.

On 22 October 1942 flying Kittyhawk Ia FR214 over the El Maghara area Saville shared in the damaging of a Bf109. His last combat success.

A Bar to his DFC award followed on 8 December 1942. The citation stated that he had added three more victories, and he was also awarded a posthumous US DFC on 16 June 1944 for operations whilst the squadron was flying with the 57th Fighter Group.

The Citation for his DFC is:

“In recognition of gallantry displayed in flying operations against the enemy”

The full citation for the bar to his DFC is:

“One day in October 1942, this officer led a formation -of -fighter aircraft on an interception patrol. A number of Messerschmitt 109s was observed and engaged after a short pursuit. During the combat, Captain Saville destroyed 2 enemy aircraft. Subsequently, he skillfully led his formation to base where, in spite of difficulties a perfect landing was effected. This officer has invariably displayed outstanding leadership, great courage and devotion to duty. Since being awarded the Distinguished Flying Cross he has destroyed at least 3 enemy aircraft.”

The citation for his American DFC reads:

“In recognition of valuable services rendered in connection with the war”

A little after 13:30 on Monday, 19 April 1943, five Bf 109s were spotted and attacked in the Cap Bon-Tunis Area. The Bf 109s dived down to 500ft, and here a dogfight occurred, F/Sgt Minchin getting strikes on the starboard wing root of one, which was seen to crash by Capt. Saville of 112 Squadron.

“Maj Saville DFC*, the commanding officer of 260 Squadron, and one of the most successful Kittyhawk pilots of the Desert campaign, was shot down and killed.”

Saville is buried in the Naples cemetery in block III Row P Grave 11.

Saville was replaced as Commanding Officer by another South African, Major P W Venter, who commanded the Squadron until April 1944.

Saville had combat or claimed victories in the following know aircraft:

With thanks to Andrew Thomas

Although not one of Saville’s mounts, this picture gives a good representation of a famous shark-mouthed 112 Squadron Kittyhawk. 112 provided some of the most famous Desert campaign pilots such as Billy Brake and Neville Duke, both double digit aces. Saville was no slouch himself with 8 destroyed, 4 or 5 probably destroyed, 8 damaged and 1 shared damaged, 1 destroyed on the ground and 1 damaged on the ground.

Three examples of 260 Squadron Kittyhawks. We must remember Saville was killed in preparation for the invasion of Italy so these schemes are tome period correct although not of his aircraft. (See list above) Also note the difference in size of the squadron code letters between the two “HX-X”s.